Himalayan Rivers are the main source and are extremely rich in Hydro Power potential. The same is being harnessed by constructing Run of the River Schemes. These Rivers have perennial water flows with snowmelt during summer and good discharges during monsoon with High Heads. The best part is the generation availability during power starved summer months.

The State of Himachal Pradesh is having about 25% of the National Hydro Power Potential, which has been estimated as 21,244 MW. Out of this about 4000 MW is harnessed so far.The State Government has been giving the highest priority for its development to meet the ever growing demand from Industry, Agriculture and Rural sectors.It is the biggest source of revenue to the State and at the same time provides power to other States also.

Because of the above situation, enterprising Developers from all over the country and even from other countries are vying with each other for allotment for developing them.

NSL is one such entrepreneur who is involved in developing projects in Himachal Pradesh. The details of the projects are briefly narrated below: 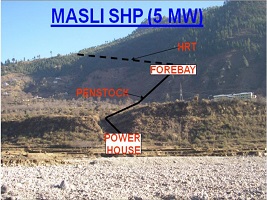